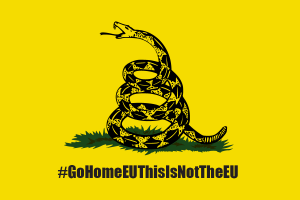 I’m sure by now, you’ve also received one of the e-mails explaining how this website or service your using has made changes in response to something called the GDPR. The GDPR (aside from sounding suspiciously like some kind of Cold War secret police agency) is a new regulation in the EU governing how big bad evil corporations can use the data you freely give them when you go online.

Well, I don’t live in the EU. So the EU can go pound sand.

Furthermore, I do not recognize the authority of the EU to impose on persons, private or corporate, that are not in the EU, any regulations regarding the conduct of their business, or any other thing for that matter.

That’s right, boys and girls. THERE IS NO U.S. FEDERAL LAW, requiring Privacy Policies at this time, although their may be state and local regs depending on where you set up shop. Corporate Privacy Policies and Terms of Service were largely created by corporate lawyers to protect the interests of the corporation. Because somewhere along the line someone either sued, threatened to sue, or were suspected of possibly threatening to sue if a corporation did something like sell their mailing list (a thing which corporations have done since the time of Babylon the Great, without privacy policy, terms of service, or any disclosure whatsoever). So the “privacy policy” was born.

So when you click the box that says “I have read and agree to the Terms of Service” (a statement which has surpassed ‘The check is in the mail’ and ‘The government is here to help you’ as top lie of all time), you may have been a smidgen less than attentive to the part where you told them they could do that.

I do actually read and understand these things and I have written a few. I’ve never seen one that didn’t include language that says if you give me your information, I can pretty much do what I want with it.

And guess what, friends and neighbors? The GDPR is not going to change that. All it does is require companies to change the language in their purposely vague and obtuse statements to be slightly less vague and obtuse when they tell you they’re gonna sell you like the piece of meat you are.

A few years ago I noticed that when I connected my phone via Bluetooth to my car sound system that I would have to manually override a warning that  listening to loud music might damage my hearing, before I could actually increase the output volume of the phone. This is due to an EU “safety regulation” that had to be implemented by Google in the Android operating system.

Now, I’ll be honest, when I am listening on headphones, the arbitrary top limit is usually just fine, but not on my car speakers, or any external Bluetooth speakers for that matter, because there’s a higher dynamic range on those. But I’m forced to fumble with this warning while I’m navigating through traffic wondering why I can barely hear “Dogs” off of Pink Floyd’s Animals even though the stereo volume is at 25, because some fat bureaucrat in a quasi-government entity that I did not elect, appoint or participate in thought it was “a good idea”.

If you’re interested in my privacy policy, it’s pretty basic. I don’t collect information about you. If I did, I wouldn’t sell it. If I decided to sell it, I’d ask you if it was okay first.

That did not require government intervention.