Well, should be spring cleaning, and technically it’s still “Spring” until the Summer Solstice on June 21, but it’s been nigh 100 degrees here in Texas so summer it is.

Two days ago, I decided to remove the Facebook mobile app from my mobile devices. I’ve not “quit Facebook” as some people are deciding. I just reached a point where their core app was taking up too much space on my phone, was turning on features and settings I had turned off, and otherwise being disagreeable to me.

Now, Facebook is a corporation in the business of making money, and I begrudge them nothing in that respect. I am also in the business of making money, and I will make those decisions that seem best to me in providing my customers value for their dollar. I personally don’t see that Facebook shares that philosophy, but to the extent that I planted my flag there some time ago, I intend to keep hold of those little bits of the social media real estate, in the event that I do decide to take a more aggressive marketing approach over there (and can justify paying for it.).

I have friends that I have met, reconnected with, or otherwise interact with on the Facebook platform. I determined, however, that the direct messaging app, pages manager, and other tools work just fine (for the moment) without the bloated core app on my phone. To the extent that I use those often enough to leave them, they remain. Otherwise I’ve resorted to doing what I did before I reluctantly added the Facebook app to my phone some years ago. I open a web browser and log into Facebook.

This has a two-fold affect. It requires me to restrict my access to the platform to those times I have a computer in front of me, so not necessarily a 24/7 thing. Secondarily, it tends to prevent me “going down the rabbit hole”, because these sessions are necessarily of a fixed limit, whereas with phone in hand, I can scroll away while half-watching TV, having lunch, walking into traffic, etc.

I think this is healthy actually. I have been growing steadily disgusted with the level of hate speech drummed up on social media, and this lets me just stay away from it. Further, what this week’s algorithm decides to surface to my feed has been steadily commercialized. Don’t get me wrong. 1) I picked the pages I keep seeing in my feed because of my interest, and 2) I understand this is a business. However, the feed has become about 10% actual human friends and 90% pages. And of the 10% friends, I’m seeing mostly third party shares -memes, videos, site links, etc. So, not really fostering “communication” so much as “broadcasting”. And I can get that on TV with both hands free to floss the cat.

Do I have a point? Maybe not. Other than to say if you see less of me, this is probably the reason. Also, I sat down earlier this week and pulled out my new fountain pen and actually hand wrote (in cursive) a couple of personal pieces and a letter to a friend, and after my wrist stopped hurting, I felt really really good. I plan on doing more of that.

I strongly encourage you to do the same. 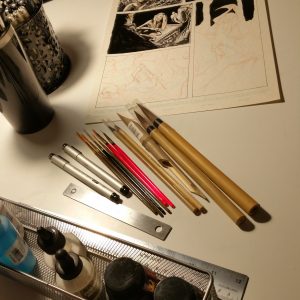 Things and stuff without computer. Who knew?